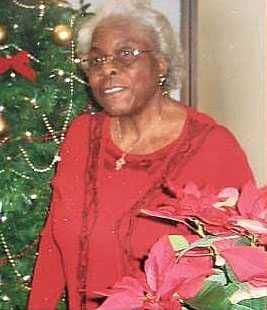 In honor of Older Americans Month, the Division of Senior and Adult Services (DSAS) wanted to spotlight a Cuyahoga resident who embodies this year’s theme of “Age My Way.”  We found the most amazing example in Centenarian Vaddie B. Todd.  Todd was recently honored by the Cuyahoga Council, friends and relatives in celebration of her 105th birthday, which occurred on March 21, 2022.

Born in Birmingham, Alabama on March 21, 1917 to Arneta Gamble and Lane Todd, Todd graduated from Industrial High School in Birmingham in 1932 and worked as a housekeeper for several years before completing cosmetology training at Poro School of Beauty.

“I graduated during the depression,” Todd explains.  “There were no jobs to be had, but I did not let negative experiences cause me to take my frustration out on anyone.  My belief kept me whole – I wouldn’t be where I am today without it.”

In 1943, Todd relocated to Cleveland, obtained her cosmetology license and became co-owner of Your Beauty Shop at 6835 Cedar Ave. To build her business acumen, Todd attended Whitings Business College in downtown Cleveland and later went on to work for the American Greetings Company. She eventually joined the Cuyahoga County Department of Health and Human Services, where she served for more than 18 years before retiring in 1982.

After retirement, Todd continued to serve the community well into her nineties by mentoring students through the Senior Citizen Tutoring Program, and serving as a resident advocate with the Cuyahoga County Housing Authority.

“A lot of folks call me ‘mother,’” Todd noted.  “Although I never had children, I believe I have mother-like qualities.  My calling has been to be a helper, especially to older people.  I love being with older people.  They have so much wisdom to share.”

Todd became a registered voter in 1943, and has voted in every election since. “What is the secret to my longevity,” she asks. “There is no secret to what God can do.  I give him the praise because he has guided my steps thus far.”

Todd prides herself on living independently and takes pride in her achievements including her most recent -- authoring the book, Looking Up, Moving Forward: An Autobiography of My Life, which was published in March 2022. The book chronicles the hardships of her childhood and the crossroads faced on her path to adulthood.  While she could have taken wrong turns, detours or broken down along the way, but she continued to look upward and move forward fueled by her faith in God.

“I am a tool in God’s hands for good,” Todd affirmed.  “That is what living is all about – making life meaningful and happy for those around you.”

When asked about the month’s theme of “Age My Way,” Todd shares her mantra. “Let go of the negativity and focus on the happiness. I tell young people all the time, ‘Where you are, I have been.  Where I am, you will be.’  Let me help you take the right path and make the right choices.”

As we finished our conversation, a friend stopped by to drop off a lovely vase of flowers.  “Thank you, mother … sister … friend,” Todd said.  “There are many people in my life that I consider to be my mother, my sister and my friend.  I am truly blessed.”